Hi I have a situation in my ear. 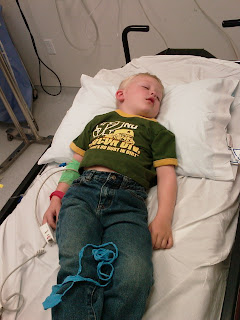 Miles sedated for the "removal of foreign body."

Miles is one crazy little man. I never know what is coming next. Yesterday he really threw me for a loop. I made the boys pop corn for a snack (I Know not so healthy) while I was getting dinner going. I went into the bedroom to get the laundry and Miles was at my door when I was on my way back out. "Mom I put a popcorn seed in my ear," he reported. "Why" "Because we don't eat those." I dropped the laundry and walked him into the bathroom so I could see and there it was deep in his ear. I told him that we would need to go to the hospital and have a doctor take it out and loaded the boys into the car. I called Michael who was out to dinner with friends on the way and picked him up at the restaurant. When we arrived at the hospital the triage nurse asked us to come right in and Miles walked up to her and said "excuse me I have a situation in my ear." I was still to flabbergasted at this time to see the humor in this statement. They did the traditional check in stuff and then we went back into the waiting room. About this time the whole absurdity of the situation really struck me and I started laughing. I was still chuckling when they called us back to a room. The nurse took a look and then the Dr. took a look. Then they decided that they were going to need to use some tools to get the kernel out. Because we didn't want to risk damaging his ear we decided to have him sedated for just a few minutes. He did well getting his IV placed and the kernel was out about 5 minutes into the sedation. Thankfully the drug they used is very short acting and Leo was back to his funny little self entertaining the Nurses as we left the hospital. As we passed the triage desk he let go of my hand and went and reported "situation resolved." I asked him how he felt about the whole thing and he said "that was absolutely comotionable and when they put the water into my pipes it was unusual." 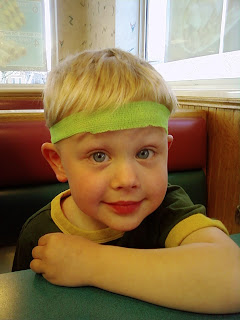 Miles about 15 minutes after his "situation" was "resolved."

Labels: Being a Mom, Miles

LOLOLOLOLOLOLOL!!! Okay, that is funny! Your boy has a way with words!

Glad it all worked out, too!

you know the ole saying "What's wrong with ya.....you got rocks in your ears?" in reference to someone not hearing you talk to them. Well, my then 6 year old didn't like all the noise in the gym so he pulled a few rocks out of his shoes from recess and put them in his ear so it wouldn't be so noisy. It worked great except for the one the got left behind. Four hours in the ER and out patient surgery the next day....the rock finally was out of his ear. Boys...aren't them something!!!!

That all sounds too familiar. It will probably be us in a few years with BB. Thanks for the message. I hope you get a referral soon.