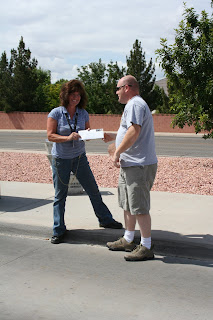 This weekend we went to Southern Utah to see some of our Korean friends. Miles practiced his "eensa" bow and Jieun (the daughter of a family Michael was friends with in Korea), Korean Grandpa, and Korean Grandma (Jieun's grandparents) thought it was so funny. Also of note we officially put our paperwork in the mail. As soon as AAC receives it we will be on the waiting list AAAAGGGHHH!! We are so excited. The poor postal worker was so confused as to why we wanted to take pictures of us dropping something in the mail. :-) Miles and Isaac had a great trip. Grandpa had them both laughing so hard. He is so funny at 80 years old he was running around throwing balls at Miles and rolling on the floor with Isaac. We also went to a dinosaur track site and the guide talked about how dinosaurs in the area would go swimming. Later that night when we got back to the hotel Miles was pretending to be a dinosaur, "swumming" around in the swimming pool.

"we were surfing the web and we found this! i was REALLY surprised at finding Miles, and Isaac", said Collin "i loved seeing pictures of the kids!", said Karen, "we are happy and excited about the adoption"! said Juli

FROM: COLLIN, KAREN, AND JULI!

Thanks for leaving us a comment! That is so exciting that you are adopting through AAC, too!! What number on the waiting list are you? I can't wait to follow your journey!!