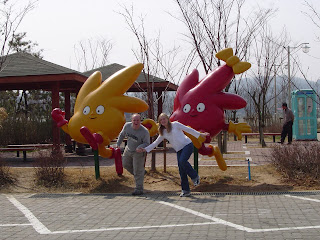 All this talk about Korea has me thinking back to the trip Michael and I took in Jan, 04. I remember how kind the people were and how Michael convinced the children he was from North Korea because his Korean is so good. The parents thought it was so funny. I remember going to the special needs orphanage Michael worked at as a missionary, one of the people there still remembered him. Also one boy followed me around stroking my arm. Ok so now I should post about this picture. Everything in Korea has cartoon mascots and these are the mascots of one of the highways. We stopped at a rest stop (amazing rest stop food btw) and took this picture after we were don we got back in the car and started driving and a woman came running up and tapped on the window. The look on her face when she saw that we were megooks was so funny but she asked us to take her to her bus (she was on a tour and had been left at the rest stop) Michael said of course and she got in the back of the car. As soon as she got in she called her friend on the bus and told them that she was in a car with an american she had to keep repeating herself because no one believed it. When we arrived at the bus there were about 50 faces staring out the window to see the crazy Americans who were driving around Korea. The Korean people are so amazing. I love the culture and I hope that we can share that love with the little one who is destined to be our child.