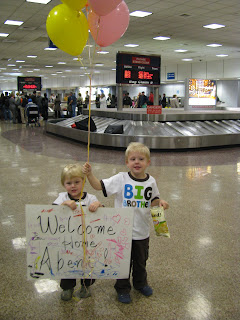 I have spoken with a few families interested in adoption recently and they have expressed concern about weather they could love an adopted child the same way they love their biological child or children. Let me tell you about my experience. Here is a shocker it isn't the same! It changes everything!!! You will never love any of your children "the same" again! Your love will intensify. After you have fought tooth and nail, and after you have missed milestones, after you have loved a child you have never met, after you have loved a grieving child, you will love your biological and adopted children MORE. Never again can you take for granted the sound of their little feet in the morning or the feeling of their little arms around their neck. You will learn to treasure those kisses and smiles those simple things like a tight grip on YOUR hand when YOUR baby is scared. Did you know it was an honor to comfort your child. Sure you did in theory but now you have learned that in reality. Here are some pics of Abeni's homecoming. Yes I love all of my children MORE because of the lessons of adoption. 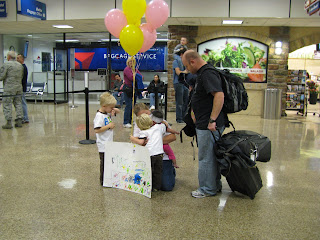 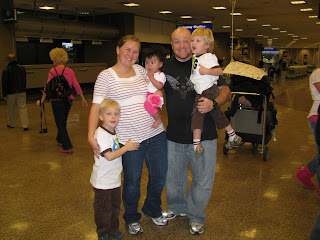 Labels: Adoption Journey, Being a Mom

When I had my first child it all came so easily. Sure we had to try for a few months and there were a few rainclouds along the way, but it all seemed so effortless. Almost like he was dreamed into existence. He fit so effortlessly into our plan for our lives. He achieved every developmental milestone at or ahead of schedule. Actually it was all so blissfully fluid that I only glanced at the books and rarely worried about my sweet smelling smiley boy. I relished glancing at the checklists and mentally ticking off his latest accomplishment. His existence and his typicalness were so expected and I knew no different. It was like the pattern of the waves on a sandy beach rhythmic, expected, calm, and perfect.

Then my second child came along. He was unplanned, certainly not unwanted, simply unplanned. He seemed to will himself into existence he came to us like a spring rainstorm on the ocean; gentle and refreshing but still somewhat shocking in it's fast appearance. Quickly the storm was over and my life returned to rhythmic waves of predictability. He was born in all his sweet perfection. There was a little wind the day of his birth. It was almost as if God were testing us for what was to come. Still the pattern of life was smooth and expected. Then came the hurricane. In less the a second everything changed, all of the things I knew, the ebb and flow of my life, were instantly different. There were dark clouds of doubt and pounding rains of uncertainty. The winds of change came fast and fierce. The storm left it's destructive mark on out life. Nothing about our new life felt like that ordered rhythm I had loved and come to expect. Nothing I though was certain was. Everything I had expected now hung in the air like fog clouding my new reality. Where I had once expected that my sons would meet every milestone, be able to do anything they wanted in life, now I doubted all of it. I wasn't even sure if my sweet innocent son would ever sit up or walk. Those milestone charts I had and the books I had partially read didn't prepare me for this. The hardest part was that this hurricane was beating on my shores while the rest of existence went along unchanged and unaware. Now I dreaded the milestone charts, I hated thinking about what he wasn't accomplishing that he was "supposed" to. Pretty soon though the storm had passed and I was taught to see through the fog. The waves of everyday life began washing up on the beach of my now uncertain life. You know what I realized? That despite the fact that the hurricane had changed things despite the scars it had left; there were still the waves and the beauty of life. So it was that God taught me to look through the fog. And when I chose to see the light the fog got thinner and thinner. I chose to not see the checklists anymore. I rejoiced when my charming cherub accomplished new things in his own way and on his own schedule. I came back to my new reality, and surprise I loved it. I came to look back at the hurricane and think, life before was wonderful, but only because of the destruction could I see our new perfection. And so the tide went in and out in it's steady and wonderful beat on my perfect, happy, uncertain shores.